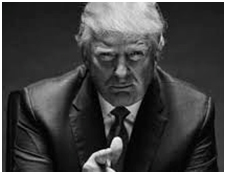 I’m Not Praying for Donald Trump

I’m sorry, but I’m not going to wish Donald Trump well, or pray for his continued recovery from Covid 19.

I don’t wish him well.  And I‘m not interested in his recovery.

Because as long as Trump is president, he will continue to kill and impoverish thousands of Americans, dismantle our democracy, and denigrate truth, science and what little civility remains in our public discourse.

But I’m allowed to take a pass on praying for Donald Trump, because I’m not a “leading Democrat.” Leading Democrats, on the other hand, appear bound to a politics and piety-fueled script.  Joe Biden, Kamala Harris, Nancy Pelosi, Barack Obama, and Bill & Hilary Clinton have all offered prayers and wishes for the President’s recovery.

We can give Joe and Kamala a bye. Their job at this point is to not blow a lead; and we wouldn’t be happy if voicing their true feelings cost them precious votes. And maybe even the others, as occasional surrogates for the top of the ticket, get a bye as well.

So how about the rest of us non-leading Dems? Are we bound to suppress our true feelings in search of our better selves?

During 2020, I’ve discussed nearly every aspect of the election with fellow GfD members. Everything from Trump’s labored breathing after climbing the White House steps  last week (the man was on steroids,mind you), to how much Pete Buttigieg actually does resemble Alfred E.Newman. But what may have lit up my voicemail most brightly was anger over Democrats’well-wishes and prayers for Donald Trump’s recovery.

One exchange typified the conversations I had:

“Am I a bad person because I don’t want Trump to recover?” I was asked.

“Would you pray for Hitler or Pol Pot to recover?” I asked back.

Moral absolutists (I guess there’s such a thing) would maintain that it’s wrong to wish the death of another. Ever.  But what about people who are so absolutely evil or inflict such an expanse of evil deeds that their good health guarantees suffering on a massive scale with no redemptive counterbalance?

If so, the question becomes whether the President of the United States is so malevolent that it could be considered immoral to wish him well or pray for his recovery.

I submit that Trump clears that bar.With ease.

His Covid disinformation campaign had cost tens of thousands of lives long before he became infected himself. And his continued adherence to it in the days since, means that many more will fall gravely ill or die as a result. Even ignoring Trump’s spectacular lack of empathy, that’s way enough, in my opinion, to place him squarely in the“No-Prayer Zone.”

But of course, there IS so much more.

How many lives will be disrupted or lost due to Trump’s roll-back of environmental regulations? What about the children forever traumatized by his intentionally barbarous border policy? And let’s not forget those consigned to poverty and ill-health by his embrace of systemic racism and disdain for the less fortunate?

And how about our GI’s killed by Putin’s bounty program that Trump condones with his silence? Or Kurds slaughtered in Syria after Trump abandoned them? And how many injuries and deaths might we expect in the coming weeks at the hands of Trump-incited hate groups “standing by” to exercise their perverted view of Second Amendment rights?

No, I didn’t pray for Trump’s recovery. Good thing I’m not a Leading Democrat. 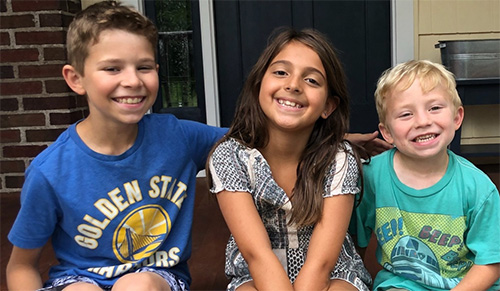 A Grandmother’s Call to Action

I am the grand mother of three young children.   Like all grandparents, I hope to have the opportunity to see them grow and flourish and find joy and purpose in their lives.  Over the past year, however, as I have become more actively engaged in discussions and studies on our climate emergency my greatest fear is will they have a future at all?

We have been told by scientists, who solely study our global climate, that we have already arrived at irreversible climate destabilization. As global warming increases, and it will, we will have "the greatest disruption of normal life that any of us has ever known.  Even a small increase will, overtime, create catastrophic changes."

Extinction-level climate destabilization is defined as "The eventual extinction of approximately up to half or more of the species on earth and most, if not all,of humanity."

If we reelect this president, who asserts that global warming is a hoax, we will lose another 4 vital years of addressing this crisis and that is not an option. This is not conjecture, this is no longer an"inconvenient truth",  this is a terrifying reality.

If you could save your grandchild's life by donating your bone marrow or kidney, would there be any question that you would do it?

Your grandchildren are facing a very real threat. The things we have taken for granted, clean air to breath, clean water to drink, food to eat, will most likely disappear in their lifetime if immediate action isn't taken. Now...not 5 years from now.

If you give this president four more years in office, it will not matter what your 401K looks like, or your stock portfolio, or his support of Israel, or that you can carry a gun, or any of the other reasons why you put him there in the first place.  He will ignore all of the warnings and we will lose the small window of opportunity we may still have to save this planet for future generations.

Our grandchildren need more than our love...
they need our vote...their lives depend on it.

A Message from the Executive Director

It’s been a tough two weeks, to be sure.

Before we could process the heartbreaking news of Ruth Bader Ginsburg’s death, Republicans were already preparing to seat another right-wing justice to trash the ACA, overturn Roe v. Wade, reinforce systemic racism, and let the climate clock run out.

Humiliating us with his outrageous debate performance, our White Supremacist President readied right-wing militias to contest the election results. And as his disinformation campaign discredited our electoral process, Senate Republicans continued to debase our democracy with their silence, and a corrupt Attorney General schemed to empower him. And there was an especially bitter twist for our Jewish members whose New Years’ wishes the night RBG died, rang hollow.

So, we have a choice. We can give in to our exhaustion with this horror show and tune out. Or, we can show the Trumpists that we will fight for the country our grandchildren will inherit.And we’ll do it like this:

1.     We send our Vote Forward letters (on October 17th)into battleground states like never before. For those who doubted the efficacy of the letters, studies have validated handwritten voter contact as an effective GOTV tool. And I’m unaware of any evidence that people are motivated to vote by NOT being contacted.

2.     We call voters in Arizona, North Carolina and other battlegrounds.  If you find cold calls anathema, I understand. But think again about the enormity of this election… and fight through your reluctance. Yes, you may be treated rudely,and that’s unpleasant.  But storming Omaha Beach was much more so, and no one’s asking for that. And yet our democracy is no less endangered today than it was in 1944.

3.     We remain agile enough to lend assistance as needed, whether overcoming voter suppression in North Carolina, or educating voters about new rules in Pennsylvania.

4.     We each recruit at least one new volunteer. That doesn’t mean tossing out a few casual suggestions; it means aggressively recruiting until you have added at least one person willing to work as hard as you are.

5.     We REFUSE TO BE DEMORALIZED OR DISTRACTED from these tasks, so that after November 3rd each of us can say, “I did all that I possibly could.”

Trumpism’s relentless assault on democracy is enough to demoralize the sturdiest ofus. Indeed, some of Trump’s palaver is intended to do just that—not to mention driving us out of our minds. But for the first time ever, we have a president threatening not to peacefully transfer power and soon, a Supreme Court that might let him get away with it.

That means we must not only win,but win big in every battleground state.

Ruth Bader Ginsburg urged us to fight for the things we care about. Let’s honor her memory by doing just that.

I thank you for all your hard work and look forward to working like hell with you over the next five weeks! 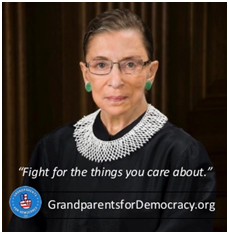 Now We Must Resist Like We Mean It, Ruthlessly

Last Friday evening, as I wondered why I even bother, I added 60 minutes to the TIVO in my bedroom for that night’s Mets game. I hit “Record” and tossed the remote on to the bed.

That’s when I noticed my wife Sheryl standing there, her hands clasped tightly in front of her like a kid about to come clean with her parents about a misdeed they’d find out about anyway.

“I don’t even know how to tell you this,” she began, trying to slow the downward trajectory of what was coming.

For a moment there was silence; the gut-punch of her words having knocked the wind out of us both.

My 8th grade Algebra classroom appeared before me. Our teacher, Mr. Vaccaro was not at his usual place by the blackboard, but huddled in the doorway with the school custodian. When he came back into the room, Mr. Vaccaro’s steps were slow and tentative, like those of a much older man trying not to lose his balance.

“The President has been shot,” Mr. Vaccaro told us.

None of us has forgotten the moment when that soul-crushing news invaded our youth.  And so too will the news of the beloved RBG’s death be chiseled into whatever part of our brain—I learned which part in junior high but have long since forgotten it—stores memories.

The stakes of the election haven’t changed. They were no less existential a week ago than they are now. But somehow RBG’s death has ramped up the urgency of ending the twin horror shows in the White House and Senate.  Suddenly now, Resistance-at-our-leisure feels incongruous. And that woman down the street who writes Vote Forward letters before noon, postcards after, and phone-banks in the evening… doesn’t seem like such a zealot.

Becausenow, we all need to be zealots. Now, fighting Trump, Barr, McConnell et al must be a second job. Or a first one.

It wouldn’t be that big of a deal, as sacrifices go. We’d be far from risking our lives to protect our democracy as our parents’ generation did. But for the next six weeks, we need to resist like we mean it, ruthlessly. That means that we recruit volunteers relentlessly who are willing to work as hard as we will. It means we don’t waste time commiserating about Trump with friends and relatives, until they too pitch in.  It means we fall behind on Net Flix, put our golf games on hold, let the leaves pile up in the yard, turn weekly card games into text banks., and yes, skip some baseball and football games.

Can we manage that for six weeks?

I sure hope so. Because if we don’t, I’m afraid we’ll get the government we deserve.